Yay! Chunky 1.2 has finally been released! Click here to view the release thread.

The release took a bit longer to build than usual because I’ve restructured a lot of things in the Chunky build process recently and I had to make sure everything worked smoothly. I had a lot of use of the launchpad staging site to test that it worked. I just added a simple prompt that asks if the release bot should upload to the staging site rather than the production site and then I could do a test release before everything went live.

I was able to reduce the size of the Chunky installer and binary files quite a bit for this release. Some of this is due to the way Chunky is packaged and some of it is removing unused code and libraries. The 1.1.14 Windows installer had a file size of 8.9 megabytes, but the one for version 1.2.0 comes in at a lean 3.7 megabyte! If you download via the launcher then you would potentially only need to download about 1 megabyte.

Here is a render I made in version 1.2 which showcases the new Savanna biome: 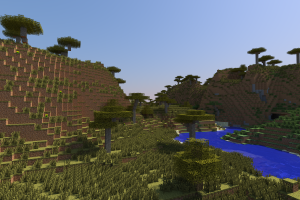