I’ve been meaning to improve the sky rendering in Chunky for a long time, and finally I have started to work on this project. I had first just planned on adding support for sky maps with full 180° vertical resolution, as opposed to the current 90° sky maps:

The increased vertical resolution means that the entire sky can be textured, without mirroring the sky map at the horizon. Most scenes do need to render the sky below the horizon specifically, however it is not uncommon some part of the render shows a bit of sky mirroring happening:

The mirroring is quite distracting, and detracts from the overall quality of the render. I think supporting full 360 by 180 degree sky maps is an important improvement.

We used spherical sky maps, or light probes as they are called if they use a high dynamic range format, in the rendering course I took last semester. I thought that it would be a shame if I did not add support for HDR formats as well, so I did. Now images using the PFM or RGBE (.hdr) formats can be loaded by Chunky. This means that Chunky is now capable of image-based lighting. Image-based lighting really gives renders a much more realistic appearance. I found several free HDR sky maps online, so I’ve been testing some out for rendering: 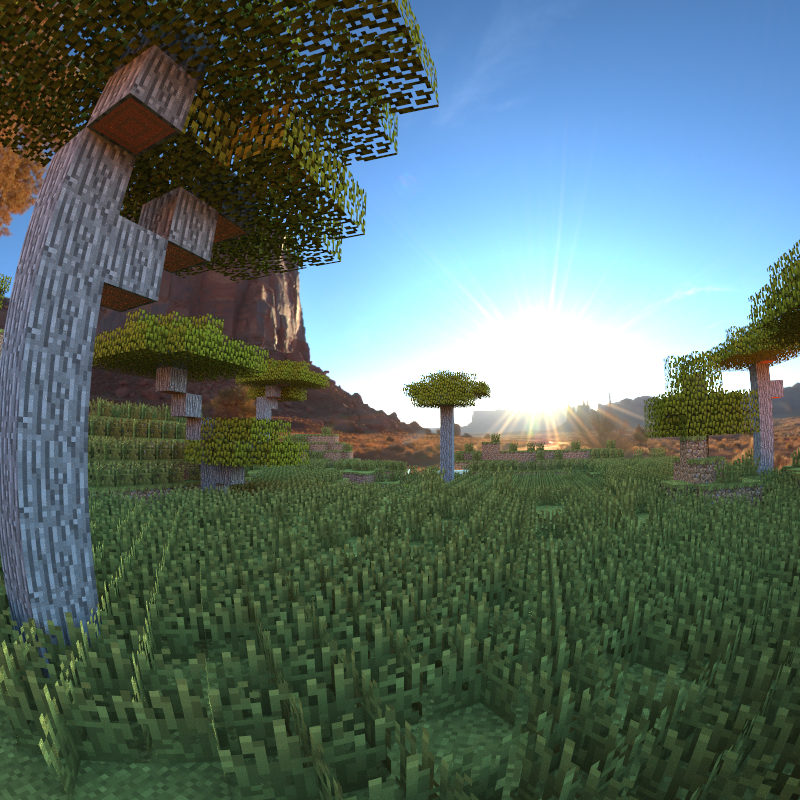 While studying the RGBE HDR image format, I also read a bit about the RADIANCE rendering system and through some links I arrived at Mark Stock’s RADIANCE page and saw that he had also implemented the Preetham et. al. sky model. I was not really satisfied with my own implementation, the one used in Chunky for the default sky, because the sky appeared too pink. My results differed slightly from the images in the paper by Preetham et. al., A Practical Analytic Model for Daylight. When I saw Mark Stock’s results, they seemed much closer to the results in the original paper, so I decided to investigate why. He provides the sources for his implementation on his website. After comparing the implementations for a while I finally arrived at what I believe is the only functional difference: he uses a different matrix to transform from the XYZ color space to RGB! I switched to using the same transformation matrix and voila! The sky looks much better, in my opinion! Here is a comparison video I made (original on the left, corrected version on the right):