I am away from home for three months. I wanted a way to ensure that two of my plants could survive while I was away, without a human watering them for a long time.

I built a small system to automate the plant watering process. Here is a picture of the system in action:

Some nice features of my watering system are:

Here are examples of the moisture graphs that my system generates: 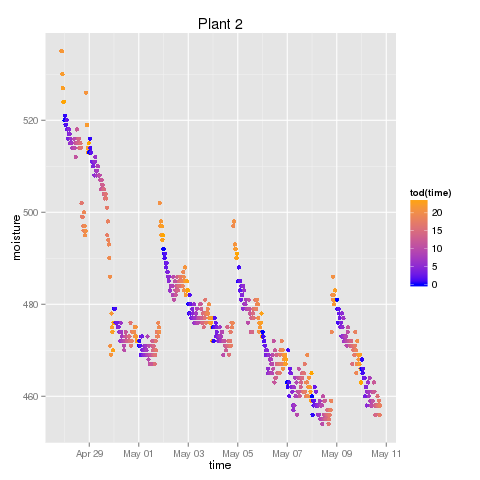 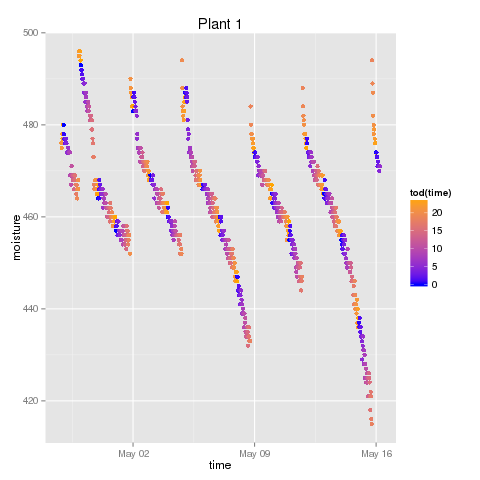 The moisture graphs are generated using the R programming language and the excellent ggplot2 library. Here is a snippet of the code that generates one of the graphs above:

One of the challenges of designing the watering system was that I had not done any hobby electronics projects before, so I had to learn a bit of electronics basics and refresh my memory from my undergrad electronics class.

I used an Arduino Uno to prototype the water pump control. I had a lot of fun using the Arduino, and I ended up doing several other projects with Arduinos as well, such as reverse engineering an IR remote control for my home audio system.

The final watering system uses an Arduino to control a submersible water pump, and to measure soil moisture using two moisture sensing devices. The Arduino uses a USB serial port to listen for commands from a Raspberry Pi which has scripts that determine the watering schedule. This setup keeps the code on the Arduino really simple, and allows me to tweak a lot of the logic in the system by logging in to the Raspberry Pi via a remote shell. I could even reprogram the Arduino remotely if I wanted to.

The Raspberry Pi has a camera for taking the surveillance pictures. I’m planning to use the images from the camera to compile a time lapse video later on.

Here is a closeup of the box that sits on top of the water reservoir. It contains the Arduino and a prototype board with the power switching circuit for the pump: 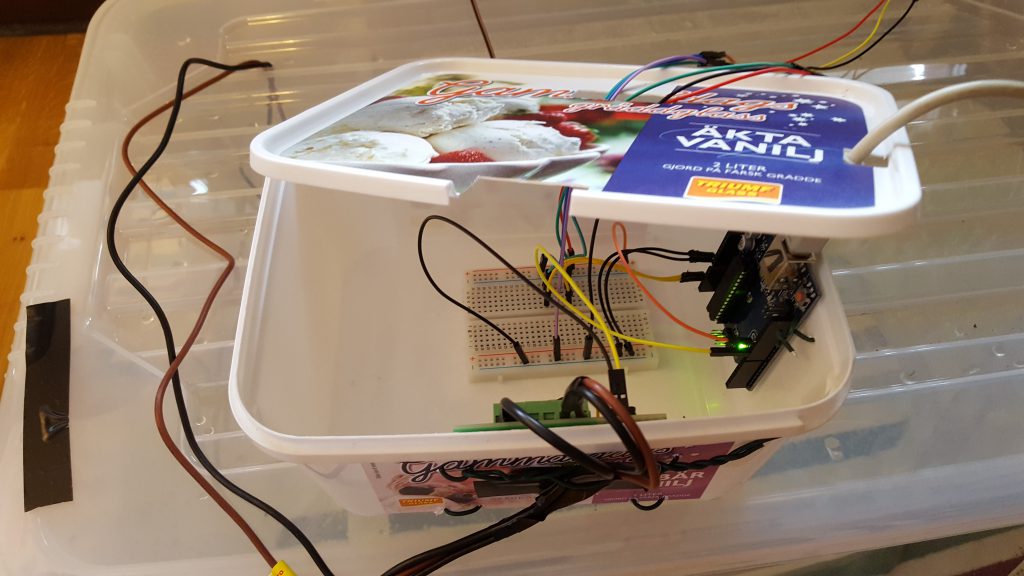 I have only one water pump that waters two separate plants. To make this work I have a regular garden hose divider to split the lab tubing and water both plants at the same time. I tweaked the length of the tubes that lead to the two plants to adjust the amount of water going to each plant. To make adjustments without drowning my plants I used plastic bags to collect the water while I was tweaking the system. Collecting the water in plastic bags let me measure exactly how much water each plant was receiving.

The current watering system is not flexible and relies on the two plants consuming relatively the same amount of water. If I decide to improve the watering system in the future I will probably install solenoid valves so that I can water each plant independently of the other. This would make the system more reliable for long-term use and make it possible to use a separate control loop for each plant.

Flooding was a big concern when I designed the system, so I placed each plant in a big plastic container large enough to collect all water in the reservoir in case a catastrophic failure should happen.

The towel under the water reservoir is there to catch condensation from the outside of the reservoir. I did not notice any condensation problems while the system was in trial mode before I left. Condensation could be a problem if the room temperature changes faster than the reservoir temperature. One other option I considered was to place the reservoir in another container like the one the big plant is standing in.

As mentioned, I would like to have individual plant watering using solenoid valves. This could also make the system modular – I could add extra plants to the water loop and have them individually watered just by adding an extra piece of tubing and a valve for each plant.

Another way of improving the system is to add moisture feedback in the control loop, and use e.g. a PID regulator to control the water pump. It is probably good to have oscillating moisture levels, at least that seems more natural for the plants, but I’d like a regulator that ensures that the three-day average moisture stays the same over a long time.