I recently bought the HTC Vive, and after I converted my living room into a Virtual Reality cave I have been trying out lots of VR experiences.

The best thing about the Vive is that it has a very accurate motion tracking system for the head mounted display and the motion controllers. The most impressive game I tried so far is a bow-and-arrow minigame in Valve’s The Lab. In the game you are tasked with defending a gate from oncoming attacker stick figures by using a bow and arrow. You pick the bow in one hand and hold an arrow in your other hand. It feels very intuitive to shoot arrows using the virtual bow, and I became very immersed in the game feeling like I was almost there in the virtual game world. 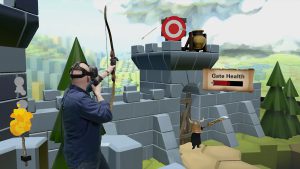 Sadly most of the games available for the Vive so far have very little content. Two of the best paid games available now are Space Pirate Trainer and Hover Junkers, but neither of them has much to offer in terms of gameplay. In Space Pirate Trainer you stand on a platform shooting flying robots that attack in waves – there is no enemy variety and you play on the same stationary platform with no other levels available, so even though the shooting action is cool it does get boring quickly. Hover Junkers does not have much more content – it similarly has a mode where you shoot flying robots attacking in waves, with slightly more enemy variety, there is also a mode where you fly around a small arena shooting at other players in a multiplayer death match.

I was very excited about trying racing and flying games in VR. It seemed like the perfect fit for the platform – ideally the VR features would just make it more immersive. So far there seem to be very few racing games with VR support. Project Cars is one game, and DiRT Rally another (for the Oculus Rift). I tried Project Cars and it made me slightly motion sick after a few races. It also has a problem keeping a high framerate, which I’ve noticed is very important for reducing motion sickness and keeping immersion. I think VR might work much better with slower paced driving games like Euro Truck Simulator 2, since it probably won’t make you motion sick as quickly.

Having high fidelity graphics does not seem at all important for VR immersion. The stereoscopic graphics make everything seem real, even if the textures have very low resolution or even if the 3D models have few polygons. High and consistent framerate and low latency matters much more for VR immersion. As soon as the framerate dips you instantly notice it, and worst of all it can make you feel motion sick. Latency is equally important – while looking around in VR it is very easy to notice the delay between your head movement and the world rotating around you. The Vive seems to handle motion tracking latency just about right, making the latency unnoticeable – at least to me – when the game I’m playing is running smoothly. It is similarly important to have fast tracking and low latency visualization of the motion controllers. When everything is tracked with low latency I can really believe that I’m swinging a lightsaber in front of me.

Speaking of lightsabers, there is a free VR demo on Steam called Trials on Tatooine. The game is very short – about 5 minutes – and has lots of framerate and latency problems. It seems like ILM tried to make it look very pretty before trying to make it run decently. During some short periods it ran okay, and the lightsaber felt very responsive and cool, but even though there is very little stuff happening on screen it still manages to tank the framerate and have terrible latency most of the time. Trials on Tatooine is an excellent example of how poor the experience gets when you sacrifice framerate and latency for graphics. 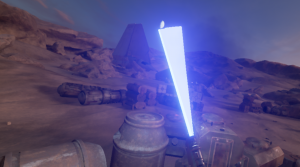 Tilt Brush is an interesting VR tool for painting in 3D, though painting 3D lines does not seem very useful to me. I’d rather use something more like ZBrush to sculpt in VR. VR could be a huge win for authoring 3D content. The industry standard 3D modeling tools are, as far as I know, all limited to using 2D screens for drawing shapes – I can imagine that many new 3D modeling tools will be made specifically to exploit VR.

The Vive has a 2160×1200 pixel display – each eye seeing roughly 1080×1200 pixels. When I use the display there is noticeable blurring when I look up or down, outside the center of the eyepieces. It’s also surprising how few pixels make out distant objects. The first times I used the HMD I felt like I had become short-sighted because I couldn’t make out distant objects clearly – it was simply because there are not enough pixels for faraway things.

There is also an effect that people describe as the “Screen Door” – it’s like a slight mesh pattern in your vision caused by the pixel grids in the display. I got used to that very quickly, and it really doesn’t detract that much from the experience. A more noticeable effect of the pixel grid is very pronounced false chromatic abberation from the pixel geometry of the display. The effect is not noticeable in the center of vision but quite noticeable near the edges of my vision where the lens blurring enhances it.

All in all, things that are reasonably close and near my viewing direction are rendered very nicely. I have not tried the Oculus Rift so I can’t say how the displays compare.

I’ve become interested in coding something for the HTC Vive now that I’ve tried some of the existing games. I’m not entirely sure what I’d make yet, but one idea was to make some kind of VR exploration tool for Minecraft. It would be very cool to be able to fly around a Minecraft world in VR.

VR is very cool, but it’s overpriced and there are too few games for it right now.