In this post I will show how the plugin system in Chunky is being implemented.

Plugin support is surprisingly easy to add in a Java application thanks to the Java reflection API. Java reflection allows runtime type introspections, and dynamic code loading. Some of the more exotic uses cases for Java reflection is to generate executable code during runtime. A compiler hosted on and targeting the JVM could even use reflection for compile-time code execution. You don’t need to build anything nearly so exotic to implement a simple plugin system.

The host application should not depend on the plugin implementation, only the Plugin interface. Loading a plugin requires knowing the class name of the plugin, so that can be supplied as a command-line argument. Here is an example of what the host application might look like:

And here is what it looks like when run on Windows:

I uploaded the code above to this GitHub repository, in case you want to play around with it yourself.

For Chunky I made a slightly more advanced plugin system. I wanted to avoid depending on the classpath being setup correctly for plugins to be loaded. Instead the path to plugin Jar files are stored in the Chunky configuration file along with some metadata including the plugin class name.

A new URLClassLoader is created for each plugin to load the plugin classes. This is necessary since the plugins are not on the Chunky classpath:

The metadata for each plugin includes an MD5 checksum to verify that the Jar file is intact. The MD5 checksum is only for basic integrity checking, not security. A plugin can do nearly anything it wants to with the computer running Chunky so it is very important that users only install plugins they trust.

So far I have only added a few basic factory interfaces which plugins can implement to modify certain parts of Chunky. More factory interfaces and callbacks will be added to the plugin API as the need arises. To figure out what should be in the API I need to have use cases that guide the development. So far I have made a handful of plugins myself, but I hope that other developers will start building their own plugins and help guide the plugin API development.

Here is a screenshot showing a plugin which modifies the rendering code by injecting an ambient occlusion renderer into Chunky:

Here is a screenshot from another plugin I made which changes the rendering for grass blocks so that they render as lava: 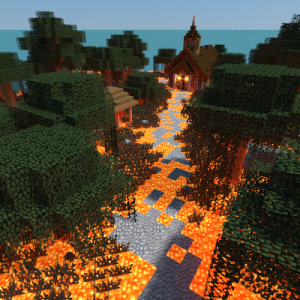 I also made a separate plugin manager application: 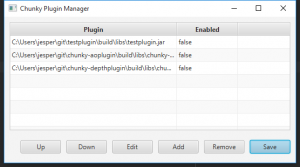 Here is the current list of plugin demos that I have uploaded to GitHub: