There has been an incredible amount of human effort put into building amazing things in Minecraft. Some players build huge structures on their own while others band together in communities to make something truly impressive together. One of the most dedicated such communities I know of is the group that has been building Broville v11 over the past few years. Last week their efforts finally became publicly available with the release of Broville v11. You can download it here. 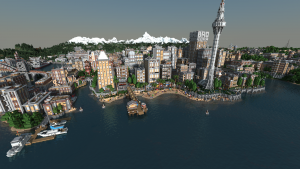 Broville v11 is a island city in an original fictional universe. There are many things about Broville that make it impressive: at first glance it is a huge build, but when you take a closer look what really blows your mind is how finely detailed everything is. An incredible amount of work has been put into making Broville v11 cohesive and full of detail.

Broville is not trying to just replicate a real city, though elements of Broville have been inspired by real cities. Broville has its own lore and fictional setting. The universe of Broville is irreverent and full of references to Internet subculture. If you like that kind of stuff I think you will dig Broville. 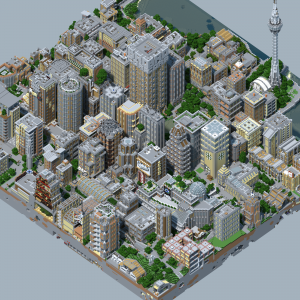 Oldshoes, who started the BroCrew, is one of the first people who used Chunky for Minecraft rendering and we’ve been in contact occasionally because of Chunky. He invited me to Broville v11 before it was finished and shared incomplete versions with me to test Chunky. GolonkaSwe is another Broville builder who has been using Chunky avidly and producing beautiful renders of Broville v11. Check out Golonkas tumblr.

Head on over to the BrovilleCity subreddit to look at more pictures of Broville and discuss Broville with other bros.